There are numerous applications for machine vision in mining and metals.

The combination of digital images, process data, and multivariate analysis (MVA) can be an extremely valuable advancement in a company’s digital transformation journey.


Read more about this paired approach in one of the following case studies:

In the article below, machine vision using color imaging is applied to 2 distinct industrial applications in the Mining and Metals industries: Request an introductory Machine Vision meeting to learn more.
Get In Touch

Inherent inconsistency in human judgment has historically caused significant challenges in industries where the quality of a product or status of a process is largely based on visual inspection. Thankfully, machine vision technology has rapidly evolved in recent years to provide precise and consistent visual product and process quantification.

The following case studies demonstrate the value of machine vision has provided the opportunity for improved product quality monitoring and process monitoring.

The following sequential workflow was applied to both applications: 1. Data Collection: Batch recipes and operating conditions are known to impact the material patterns in the final countertop slab product. The purpose of this image analysis was to identify visual evaluation metrics that can be used to characterize the appearance of the countertop consistently. The dataset had 16 greyscale images (24-bit 1024 × 1024) of countertop slab samples made of natural quartz and plastic resin. Each image represented the final product resulting from a different batch operation (16 batches).

2. Image Feature Extraction: Each original countertop image was subdivided into four smaller images (see slab number 54 in the figure on the right). The subdivided images were then treated as different products within the same batch expanding the dataset to 64 images (16 images with 4 sub images each).

Four-level 2D discrete wavelet transform (DWT) and order-one Coiflet filters were used for feature extraction. The resulting 13 wavelet sub-images (from each of the 64 images) were then used to calculate an “energy signature”.

3. MVA Modeling and Analysis: Energy signatures extracted from 48 images (3 images per batch) were selected as a training set. Mean-centering and unit-variance scaling were applied prior to building the PCA model. Examining w1 bars on the loading plot, the positive t1 direction is associated with low values of a4 (low frequency components) and high values of dhv4, dd4, and dhv3, dd2, dhv1, and d1 (intermediate and high frequency components). Subject-matter experts were able to interpret these results by considering slabs 54 and 75, which are located on opposite sides of the t1 axis. Based on a qualitative comparison of these two slabs, it was concluded that the first principal component in this model captures an aesthetic quality termed “fineness”.

Examining the w2 bars on the loading plot, the positive t2 direction is associated with high values of a4, dhv4, dd4, and dhv3 (low and mid frequency components) and low values of dd2, dhv1, and d1. A review with subject-matter experts, similar to the investigation of t1, revealed that the second principal component is associated with aesthetic contrast in the countertop slab products.

4. Real Time Implementation: A monitoring model was built on 16 good batches to detect off-spec product quality through the Hotelling T2 and SPE plots. Subject-matter experts confirmed that several of the detected outliers (slab numbers 54, 58, and 75) had in fact been documented as off-spec product.

In addition to the monitoring model, the PCA results from the earlier data analysis step provide further insight on off-spec countertops. For example, since slab number 90 has a positive t1 score and a negative t2 score, it can be interpreted that this slab has high “fineness” and low “contrast”. This type of insight can be helpful in making quick process changes to address quality concerns.

Goal: Extract features from color images that can quantify the status of the zinc recovery process and thus can be used for process monitoring and control. 1. Data Collection: It is widely known that color and morphology of the flotation froth as well as its structure (texture) are closely related to mineral concentrations and process status. Therefore, the purpose of this image analysis was to extract features that could indicate the status of the process and thus be used for process monitoring and control. The dataset had 943 color images spanning 6 distinct steady-state conditions across the process. (Steady-state conditions were selected by process experts at the Laronde plant in Quebec. Principal component analysis (PCA) was subsequently used for dimensionality reduction. The vector of extracted features was simplified and condensed into a smaller number of features that represent the most important information.

It should be noted that the fact that product quality or the status of a process may drift gradually, rather than a sudden and discrete shift, can complicate automated visual inspection. For example, in the case of the flotation process, various factors such as a change in raw material properties will have a gradual impact on the present state of the process. Here, the use of PCA and continuous latent variables provides the advantage of being able to continuously monitor and control the process based on the quantified visual properties.

3. MVA Modeling and Analysis A total of 943 images that capture the 6 steady-state regions were selected for training. A PCA model was built on the extracted froth features (clear windows (CL), black holes (BH), bubble size histogram vector (N1-N5)) of the selected data.

The score plot (which can be interpreted as an operating map summary) contains 5 clusters of data, each representing 1 of the 6 steady-states (SS1, SS2, SS3, SS4, SS5, SS6). There is one cluster that is an exception which contains a single/overlapped cluster of both SS4 and SS5. A visual inspection of images from SS4 and SS5 (images 511 and 630) confirm that these 2 steady-states are much more similar to one another than any other steady-states as they have similar bubbles size and clear window characteristics.

4. Real Time Implementation: The developed score plot can be used to monitor steady-state and transitions between steady-states. For steady-state monitoring, the score plot can be divided into regions generally encompassing a single steady state, as illustrated.

For transient-state monitoring, the time-series of predicted t1 and t2 scores can be plotted for easier interpretation. For example, images captured during the transition from SS2 to SS3 are illustrated. The movement of the scores across the quadrants can be compared to the 6 images to verify the changing image features.

These monitoring charts were shown to provide an excellent quantification of flotation froth status during both transient and steady-state operation. 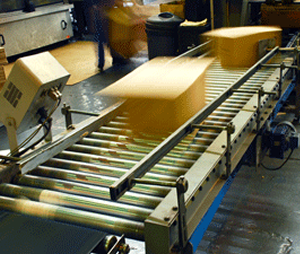